Adam Giglia and his friend Tim McCarren had just finished a half marathon in Adam’s hometown of Rochester, New York. They took a moment to look back on an inconceivable 13.1 miles.

“Can you imagine,” they said between breaths, “doing a full marathon?” The two laughed.

Adam never considered himself much of a runner, though sports have always been in his blood. By age three – much like the rest of western New York – he was in skates and playing hockey.

When the Miller family moved-in across the street during Adam’s sixth grade year, he and new neighbor Erik Miller bonded over sports. Adam and Erik were only a year apart in school, and became fast friends.

Living across the street from each other meant getting together often, which was also the case for their families. 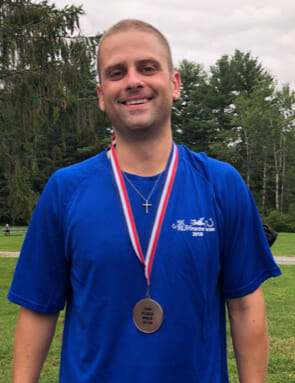 Adam pauses for a post-run photo.

Adam’s father Lew and Erik’s father Jack would often take the boys golfing. It was competitive, but always fun. Jack would sometimes talk about his glory days running while growing up in Chicago – even showing his many photos from distance races over the years.

“He was passionate about it,” Adam says.

Adam knew what he had to do, but the steps to get there seemed daunting. Everything he read said how challenging marathons could be. Was it possible?

His mind was set. He promised to run the 2019 Chicago Marathon in Jack’s honor.

That commitment was the ultimate currency of their friendship to Jack. Though he ran the Boston Marathon, he had never done so in his native Chicago. Adam was hopeful Jack would have the chance.

“You’re going to win next year,” he said.

In September, Jack lost his life to lung cancer. Now, Adam runs not only for him, but for his grieving friend Erik and lung cancer survivors everywhere.

“I’m committed to do whatever it takes to cross that finish line.”

Training has lived up to its reputation. He describes it as the hardest thing he’s ever done in his life. He wants to finish in less than four hours, and after months of sacrifice he’s getting close to his goal.

His friends and family will be at the marathon to support him. Tim, who has played chief motivator during training, will once again run alongside Adam. But they’ll be missing Jack. 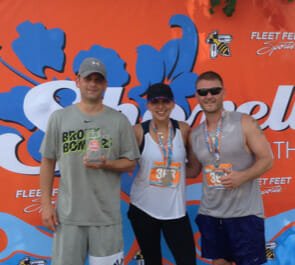 Tim, his wife Marissa and Adam after the half marathon in Rochester.

Adam imagines Jack would want to celebrate by buying a round of beers.

Those watching the marathon can spot Adam in his custom t-shirt with Chicago Bears colors. Jack was a huge fan of the Bears.

Adam sees every step of 26.2 miles as an opportunity to raise funds for lung cancer with Respiratory Health Association’s Lung Power Team. Money raised for research may prevent someone else from going through what Jack went through.