Respiratory Health Association joined with other patient advocacy organizations in congratulating the City of Chicago on its announcement that cigarette smoking by high school students in Chicago is at an all-time low. According to new data from the Centers for Disease Control and Prevention (CDC), only 6 percent of Chicago high school students reported current cigarette smoking in 2017 – a 56 percent decline from 2011. 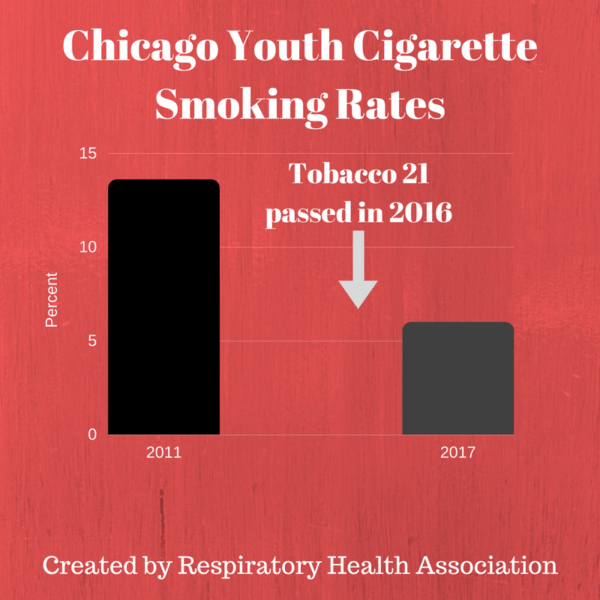 Since 2011 the Chicago youth cigarette smoking rate has declined from 13.6% to just 6%.

Chicago has been recognized as a national leader in tobacco control. Key efforts include:

RHA was a local leader in the advocacy efforts leading to the adoption of these policies, including Tobacco 21, in Chicago.

“Chicago continues to lead the fight against tobacco. We’re encouraged by the data because it demonstrates that our collective efforts are successful in building a tobacco-free generation,” said Joel Africk, President and Chief Executive Officer of Respiratory Health Association and Healthy Chicago community co-leader for tobacco control. “More work remains to be done to prevent the use of other tobacco products,” he added, “including cigars, electronic cigarettes and smokeless tobacco.”

Building on Chicago’s success, RHA is now advocating for statewide adoption of Tobacco 21 in Illinois.

Contact us for more information on how you can support Tobacco 21.