In April 2018, 9–year-old Lauren Wilson shook hands with Senator Daniel Biss and sat down to educate him about a new law being considered in the Illinois legislature – Stock Emergency Asthma Rescue Medication in Schools. The legislation allows schools across the state to keep a supply of albuterol on hand to deal with asthma episodes and other respiratory emergencies, similar to how they keep an EpiPen on hand for allergy emergencies. Advocates like Lauren helped get the law passed in May 2018– now, they’re trying to make sure that it gets implemented. For her first persuasive writing assignment in 3rd grade, she wrote a 3-page paper on why they need to use the new law to stock albuterol in her school. 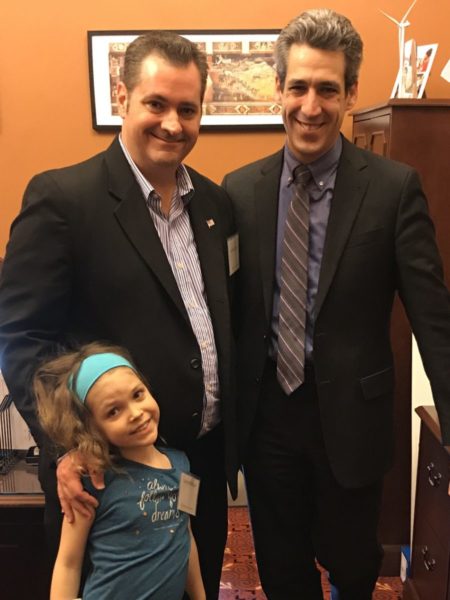 “Why does it take so long?” That’s Lauren’s newest question for Illinois State legislators. For kids living with asthma who rely on medications like albuterol, waiting for the law to take effect impacts their ability to live well. Lauren carries her inhaler in her backpack and keeps a backup with the school nurse, but those medications are specific to Lauren. The new law lets schools keep ‘undesignated’ medication – meaning it is not prescribed to a specific person – that can be administered to anyone in respiratory distress. This is an important fail-safe in case someone runs out of medication, forgets or loses an inhaler or, as often happens, experiences breathing difficulty for the first time and hasn’t been diagnosed yet. Lauren wants her school to be as prepared for an asthma episode as she is. Lauren has been an advocate for those living with asthma for most of her life, which stems from her own experience with respiratory issues. Lauren was in and out of the hospital and emergency care as an infant. “It was the scariest experience of my life,” her father, Jeremy remembers. “When they tell you that you should say goodbye to your child after hearing she has gone into respiratory failure.”

After her respiratory failure at six months old, doctors diagnosed Lauren with reactive airway because she was too young at the time for a full asthma diagnosis. She began treatment at that time. At four years old, her pulmonologist made the expected diagnosis of asthma. Throughout this journey, Lauren’s mom, Stephanie, began researching ways the entire family could be proactive in Lauren’s care. They worked closely with a pediatrician to develop an asthma action plan and watched Lauren’s symptoms to identify her triggers. Stephanie’s research also led her to Respiratory Health Association, and the entire family got involved. Lauren’s last hospitalization came last fall. Her asthma has been mostly under control since, but it always requires careful monitoring. In the meantime, Lauren continues to participate in sports and spend time with her friends. “I feel pretty fine doing sports,” Lauren says. “I usually don’t have triggers with sports, mostly just allergies and colds.”

Stephanie reminds her, “If you really pushed, we’d give you 2 pumps of albuterol for stair climbs.” Lauren is very proud of the collection of medals she has from sports and charity events. “I keep them all around the house,” she says mischievously. “We’ll find them everywhere,” Stephanie confirms. In October 2018 RHA presented her an award for her asthma advocacy efforts. The Next Generation Advocate awards are given to young people who stand up for a future free of lung disease and to protect our clean air. Lauren keeps that award in the front of the house, where everyone can see it. 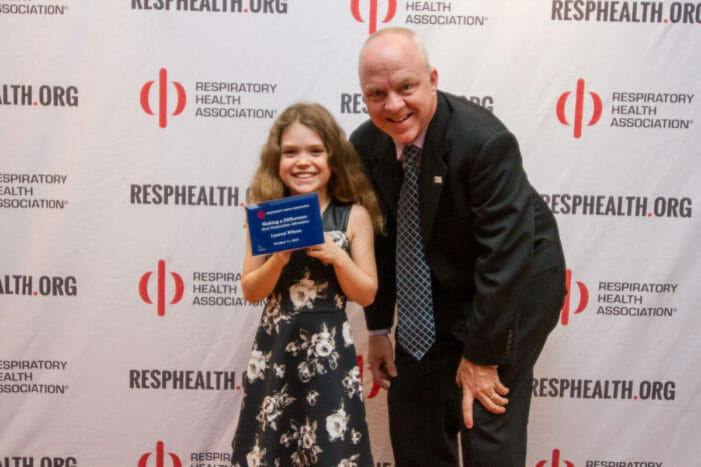 She also has medals for Hustle Chicago, RHA’s stair climb, and the CowaLUNGa Charity Bike Tour, which she participated in as an 18-mile rider the first weekend in August. But there are challenges that come with asthma, summer heat, and physical activity. “We didn’t go out and ride today,” Jeremy mentions. “But she did 9 miles a few days ago.” Before July’s heat wave hit the Midwest, Lauren rode a couple times a week. But as the weather got hotter, the air quality worsened and became unhealthy for people with lung disease. Now that it’s cooled down and air quality has improved, she’s back to good riding conditions. It’s just another thing her parents monitor to help keep her asthma under control.

Jeremy and Stephanie joined Lauren for their 5th year of riding CowaLUNGa. She rode 18 miles on the back of Jeremy’s bike and plans to ride the 18 miles on her own bike next year. With plenty of time to train, she’s ready for the challenge. Lauren proudly describes her bike as blue and silver. “I just learned how to shift gears on it. I went on my first hill recently, and down. That’ll make the hill on the first day not as bad,” she says.

Another milestone she’s ready for?

“She wants that big 20 year trophy,” Jeremy says of the celebratory trophies RHA gives five, 10, 15 and 20 year riders. “And I believe she’ll get it.”

Besides asking her fellow riders to join her in supporting RHA’s advocacy efforts, she offers this advice: “Get out and ride. Wear comfy clothes: bike shorts, gloves and a helmet.” To join The Wilsons in their efforts to fund asthma research, advocacy and education, support their fundraising here.