Penny Runs for a Future Free of Lung Disease 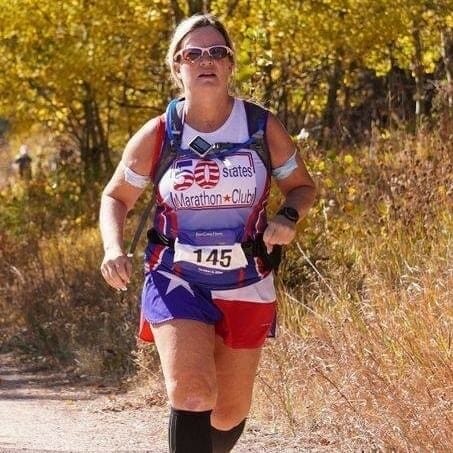 Penny runs in her 50 States Marathon Club shirt. Members of the organization all share the goal of running a marathon in every U.S. state.

When Penny Wilbanks started a running program 15 years ago, she never imagined where it would take her. Now, after completing 18 marathons in 15 states, her goal is to run one in all 50.

“I truly have a passion for it,” she says.

Penny started running during junior high in Texas when she joined the track and cross-country teams. It was good training for soccer, which she played regularly into college.

While she stopped running for much of her adult life, motivation to restart a fitness routine led her to Google search “solo sports” in 2005. Shortly after, she attended an informational meeting at a local running store.

After running half marathons for 13 years, she decided in 2018 to run her first marathon — the Jack and Jill Marathon in North Bend, Washington. And she hasn’t looked back. “I knew I wanted to run in Chicago for 2020,” Penny shares. “And when I was looking for a charity to run for, Respiratory Health Association stuck out.”

For Penny, lung disease is personal. In 2008, she noticed running became more of a struggle. Often, she would have to stop and catch her breath. One day, she collapsed while training on a nearby track.

Penny was originally diagnosed with exercise-induced asthma. When she went to her family doctor, he prescribed an inhaler. She didn’t leave home without it until the possibility came up that she may not have asthma. This led to an echo cardiogram for valve problems in her heart which showed nothing. A scan revealed spots on her lungs. Although grateful when doctors ruled out lung cancer, the cause of her recent breathing troubles remained a mystery. Doctors believe she has weakened lung muscles, and knowing the value of good lung health she continues to see specialists. 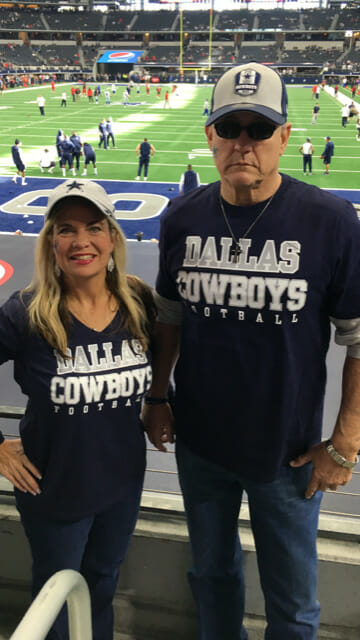 Penny and her husband at a Dallas Cowboys game.

Penny’s lung disease story is just one of many in her family. Her grandparents both died of lung cancer – her grandmother only three weeks after diagnosis. Her aunt lives with chronic obstructive pulmonary disease (COPD). Seeing loved ones fight these battles has even led her father to quit smoking.

“Running on Lung Power Team is like running for my heart and soul – my family,” she says. “Each step is one toward healthier lungs and clean air.”

When the Chicago Marathon was cancelled in 2020, it threw a wrench in her plans. But as Penny puts it: “I just don’t believe in quitting.” She continues to run despite the cancellation.

This persistence defines her running style. In one particularly memorable half marathon race, she developed a giant blister that was so painful it slowed her considerably. Penny normally completes a half marathon in two and a half hours. Her husband even went to race officials when he couldn’t see her at the three-hour mark. She recalls her triumphant moment 30 minutes later at the 3:30 cutoff.

“There I came, ankle gushing blood, skipping across the finish. I just couldn’t give up until I saw the end.”

You find out a lot about her approach to life in a year full of challenges and cancellations when listening to her running philosophy: “You take that as your bad time, you take that as your licks. But you finish. Your medal looks the same as the first-place winner.”

The Chicago Marathon postponement, while disappointing, was just another challenge for Penny. She’s running in 2021 and the delay means Chicago will mark the halfway point of her 50 state marathon goal. And she cannot wait to reach this milestone while running for Respiratory Health Association.

To support Penny’s fight against lung disease, you can donate to her fundraiser here. 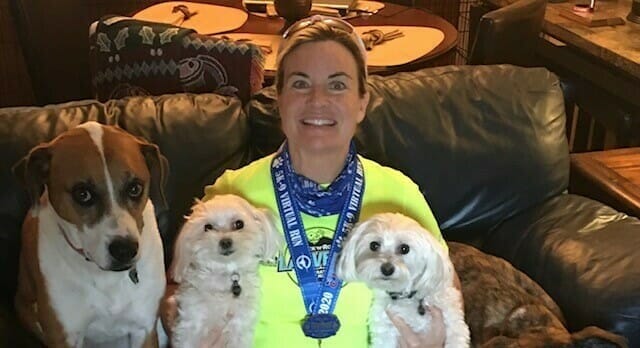