RHA Partners with Third Graders to Reduce Tobacco Use

You’re never too young to be an advocate.

VLA is unique because it incorporates social justice into the curriculum. Every grade level chooses a Grassroots Campaign, or service-learning community project to help solve a social problem, for the class to work on together.

Ms. Walmsley’s class identified tobacco and smoking as a problem in their school community, and RHA’s tobacco team was invited to address the class about the dangers of smoking, particularly e-cigarettes, which are a growing concern in schools across the country. 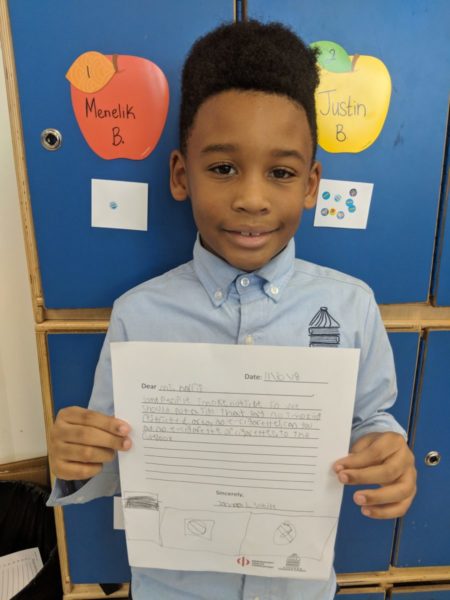 Jamaal, third-grader at Village Leadership Academy, wrote to their principal regarding E-cigarette policy at their school.

The third graders were ambitious and knowledgeable, doing most of their research on E-cigarettes before the Tobacco team’s presentation, Ms. Walmsley reported. Her class asked about the about myths vs. facts, trends in tobacco use, chemicals in a cigarette, and the effects of tobacco use. Sometimes even appearing to “teach” the program leaders.

At the end of the session, each student wrote a letter to their principal, asking her to include language about e-cigarettes in their school wellness policy. The students were eager to make a difference, even at the local school level.

In 2015, a kindergarten classroom from VLA identified secondhand smoke as the topic for their community project, and their teacher invited RHA to speak to the students about the effects of tobacco in the home and smoking free housing.

In addition to learning how secondhand smoke impacts their health, these young advocates committed to sending letters to landlords in their communities encouraging them to develop smoking-free housing and send smoke-free pledges to their families.

We hope that reaching these children at a young age and engaging them in advocacy will help keep them healthy and more likely to avoid deadly addiction later in life.

Recently, RHA has led efforts to pass Tobacco 21, legislation that would restrict youth access to tobacco products, at the state level. Increasing the tobacco purchase age to 21 is an effective strategy to reduce youth smoking because it removes tobacco products from teen social circles.

As of October 29, 2018, six states — California, New Jersey, Massachusetts, Oregon, Hawaii and Maine– and hundreds of municipalities around the US have raised the tobacco purchase age to 21.