Despite the heavy toll that lung disease takes on Americans each year, investment in lung disease research is relatively modest. As a result, ideas that could lead to new treatments, earlier detection, or even cures are never explored. Lung disease remains the fourth leading cause of death in the U.S.

To help change this unfortunate situation, each year Respiratory Health Association (RHA) awards research grants to promising early-career researchers in the areas of lung cancer, COPD, pulmonary fibrosis and other respiratory diseases. One of RHA’s first research investments, in the work of Dr. Navdeep Chandel, has seen incredible results.

Dr. Chandel was awarded the National Cancer Institute’s Outstanding Investigator Award. This grant supports investigators who have made significant contributions in cancer research and are pursuing areas with unusual potential to move the field forward. Dr. Chandel’s current project grew out of an idea he proposed to RHA in 2008.

In 2008, Dr. Chandel thought there might be a fundamentally different way to disrupt cancer cell growth. The study RHA helped fund showed that he might be onto something. 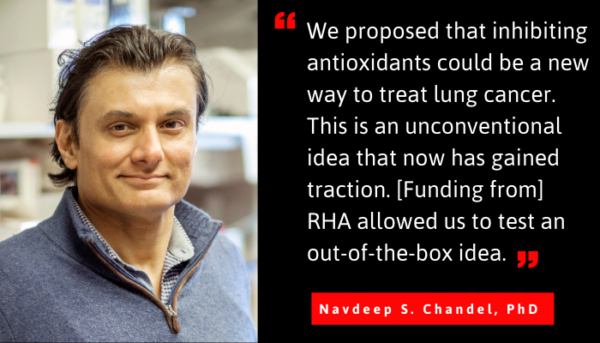 As Dr. Chandel wrote in his 2010 report to RHA, “This study will change our thinking about cancer cell metabolism and opens up therapeutic targeting.” In the years since, this is exactly what has happened. Dr. Chandel and his colleagues have tested drug therapies which inhibit antioxidants and have been shown to reduce lung cancer tumors.

Dr. Chandel’s success shows the importance of RHA’s research program. Through our funding we assist researchers with compiling the data needed to approach larger research organizations, such as the National Cancer Institute. By providing a grant to Dr. Chandel in 2008, we helped change the dialogue around lung cancer treatments.

And the future became a little brighter.