Registration for CowaLUNGa Charity Bike Tour 2019 is now open! Escape the noise of the city for a weekend and explore the scenic Midwest as you bike through northern Illinois into southern Wisconsin. 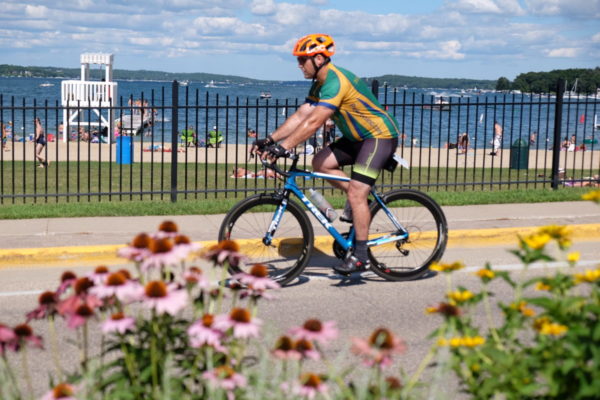 Along the way, you’ll experience an unparalleled level of camaraderie and support from other cyclists and Respiratory Health Association, while helping RHA achieve its vision of healthy lungs and clean air for all.

This is RHA’s 23rd year hosting the CowaLUNGa bike ride, so you can rely on our expertise from years of experience to give you a world-class event.

What’s Included When you Register?

All routes are one-way with free return transportation back to the start line and include full SAG and medical support; two daily rest stops; breakfast and dinner. Free overnight parking is available onsite at Gurnee Mills for the event’s duration.

Saturday night is spent at the newly-remodeled Conference Point Center (CPC) on the beautiful shores of Lake Geneva. CPC has 5 stars on Facebook and 4.5 stars on Google reviews!

Sunday night is CowaLUNGa’s college throw back night at University of Wisconsin Whitewater. Prop those dorm doors open and relive those carefree campus days, complete with games and entertainment in the UWW Student Center.

Read more about housing, logistics and other event details here.

Additionally, every participant receives an event shirt and a finisher’s medal at the end of the route to commemorate the bike ride!

Registration fees and fundraising minimums vary by mileage. Early bird registration discounts are available until June 15.  First-time riders that select two or three day routes receive 50% off registration. Call 312-628-0200 for more information on or to register with our first-time rider discount. 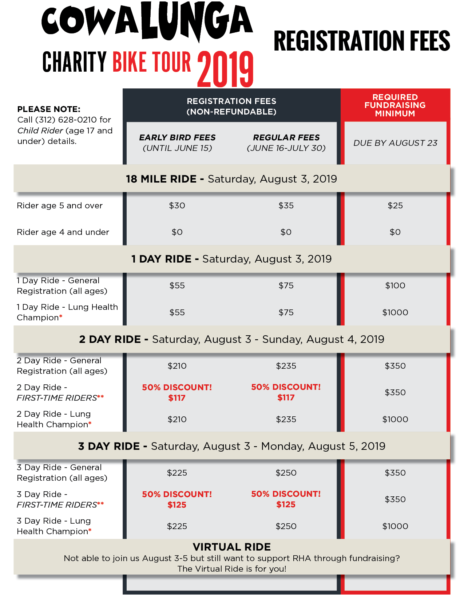 Still thinking it over? Sign up for CowaLUNGa email updates. 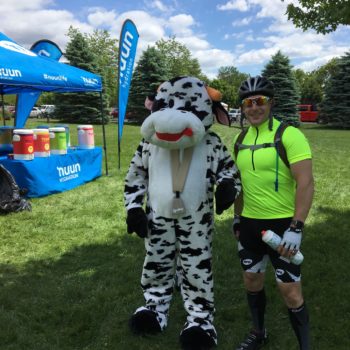 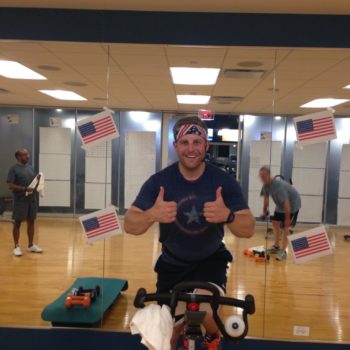 WHY: The tour raises awareness and funds to fight lung diseases such as asthma, lung cancer and chronic obstructive pulmonary disease (COPD) and to support clean air and other healthy lung initiatives. This year’s event kicks off with special guests Illinois State Senator Terry Link, Lake County Board Member Paul Frank and youth advocates for lung health from the Catalyst Youth Prevention Group of Stevenson High School. Respiratory Health Association will thank participants for the important roles they played in passing Illinois’ new Tobacco 21 legislation, which raises the tobacco purchase age to 21 from 18, a policy proven to reduce teen smoking. The deadline for Gov. Rauner to sign Tobacco 21 into law is August 27.

WHERE: Start line located in Gurnee Mills Parking Lot H, at the intersection of Interstate 94 and Grand Avenue (IL 132) in Gurnee, Ill. Cyclists will travel through southern Wisconsin Aug. 5 and 6 with stops in Williams Bay, Whitewater, and Hubertus, Wisc.

Registration for CowaLUNGa Charity Bike Tour 2018 is now open! Escape the noise of the city for a weekend and explore the scenic Midwest as you bike through northern Illinois into southern Wisconsin.

Along the way, you’ll experience an unparalleled level of camaraderie and support from other cyclists and Respiratory Health Association, while helping RHA achieve its vision of healthy lungs and clean air for all.

All routes are one-way with full SAG and medical support and include two daily rest stops, breakfast and dinner. Free overnight parking is available onsite at Gurnee Mills for the event’s duration.

Additionally, every participant receives an event shirt and a finisher’s medal at the end of the route to commemorate the bike ride!

We provide return transportation for you and your bike back to Gurnee, Illinois at the end of each day. 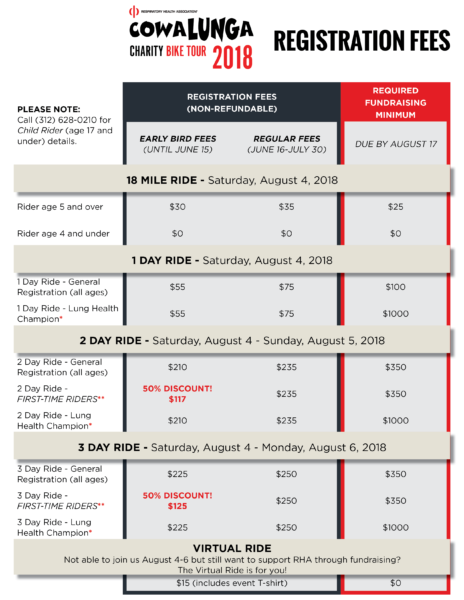 Proving your endurance by riding the 100-mile “century” is one of the ultimate badges of honor for cyclists. But at CowaLUNGa, biking 100 miles means even more:

All fees and fundraising support RHA’s work toward healthy lungs and clean air for all!

Interested in riding a century at CowaLUNGa? Here’s what you need to know!

Century Riders receive all normal benefits of the 2 or 3 Day Rides, including:

CowaLUNGa’s Century Ride takes place on Day 2, so you must be registered for the 2 or 3 Day Ride to be able to ride the Century. Learn more about each day of the bike tour. All 2 or 3 Day registration fees and fundraising minimums apply. 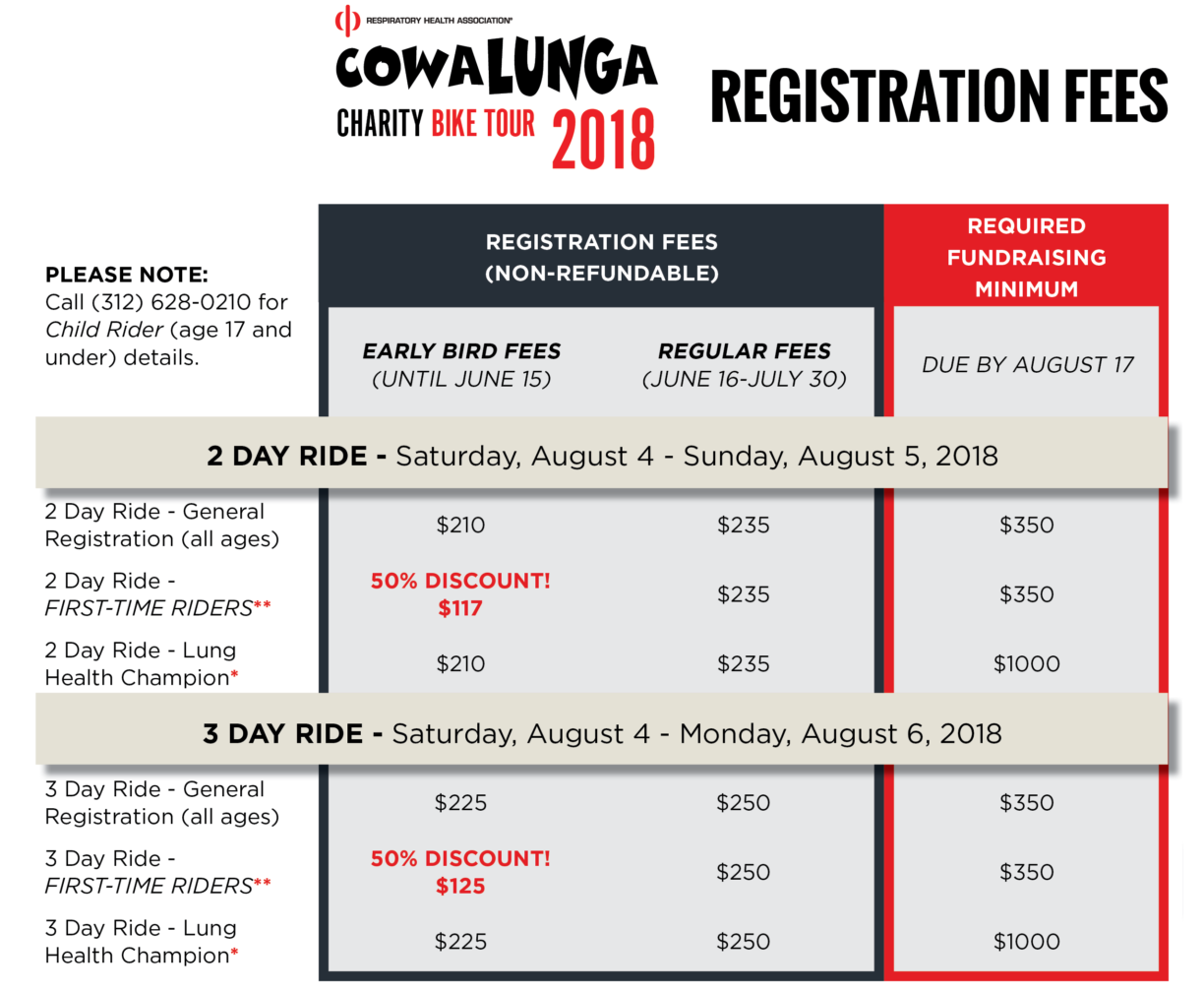 **First-Time Rider Discount: To qualify for this discount, you must be a new rider and have never ridden the CowaLUNGa Charity Bike Tour before. Discount only applies to registration fees. Fundraising is required. Offer expires June 15. To get a coupon code for this discount, email us or call (312) 628-0210. 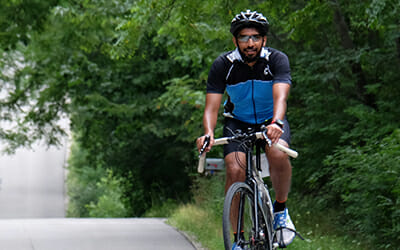 On Day 2, the route opens at 6:45 a.m. All riders, including non-Century riders, will ride approximately 65 miles through areas of Wisconsin’s Kettle Moraine State Forest with rest stops in the town of Lyons, Wisconsin and at the LaGrange General Store in Whitewater, Wisconsin.

If you want to ride the Century, you’ll sign up and receive the route instructions at the second rest stop at LaGrange General Store, where the additional 35-mile loop starts and ends.

Entrance to the Century Loop opens at 11 a.m. and ends at 2 p.m., so plan your riding day accordingly. Cue sheets will not be given out after 2 p.m. No exceptions. RHA reserves the right to cancel the Century Ride at any time to ensure the safety of our riders.

Century riders must complete the loop by 4:30 p.m. to ensure coverage by the CowaLUNGa support teams.

Lunch is on your own and you’ll ride onto the University of Wisconsin-Whitewater’s campus to end the day. Check-in is required at each day’s finish line. Please note that CowaLUNGa riders are required to wear helmets at all times on their bikes. NO HELMET, NO RIDE.

“When looking for a multi-day ride, important things for me are good SAG support while on the road, indoor plumbing at rest stops, sleeping indoors, and supporting a worthwhile cause. CowaLUNGa has all of those things and more. From the moment I check in on the morning of Day One until I load the bus for the ride home, the RHA team takes care of my needs, so all I need to worry about is riding.”

Ready to ride? Start your journey!