Matt Cantu has lots of good reasons to run with RHA’s Lung Power Team, but initially, he was worried about fundraising.

His first donors were his wife’s parents. Then, Matt put out a request for donations on social media, but he did more than just copy and paste a link. He made his posts – including the message on his Lung Power Team fundraising page – a testament to his decision to run the Chicago Marathon.

“Make sure you write something about why you care,” Matt advises. 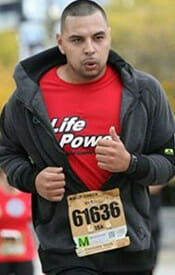 Matt is as green to marathons as he is to the world of fundraising. But his reasons for running are rooted in respect for family and his health. Remembering the why helps him tackle these new challenges.

“If you’re not listening to anything while you run, you play things in your mind. It’s easy to give up until you remember all of the reasons why you’re doing it. It helps you to keep going.”

His reasons include his wife, Megan, who lives with asthma and sarcoidosis. Sarcoidosis involves collections of cells that inflame organs in the body, including the lungs. Four years ago, she struggled to breathe. Her symptoms improved dramatically with medical care and a healthier, more active lifestyle.

Although her experience isn’t typical of many people living with sarcoidosis, and she still has both conditions, she’s running 5Ks now. 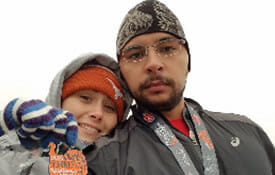 When she first invited Matt to join her last year, running was painful, but he continued to work hard to improve his running times. Now Megan – who Matt describes as his best friend – is always there to support him for his races.

Although racing is a fun challenge and a bonding activity for them both, they carry a sense of responsibility to stay healthy for themselves and their family – because Matt also runs in remembrance.

“He was a Vietnam Vet; that was something that he was really proud of. He wore his Vietnam hat every day; he walked the lifestyle of a soldier. When that disease took over him… to see his body just go down…” Matt trails off in thought. 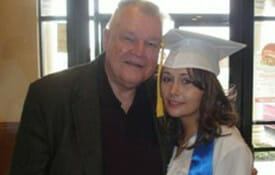 Robert was a longtime smoker. Though he battled bravely, his health continued to deteriorate. After witnessing this painful progression, as well as the decisions of other family members to become healthier and quit smoking, Matt decided he wanted to get more fit. He believes that if more people witnessed a loved one go through what Robert did, they would make the same choice.

“He went from a really strong man to someone who couldn’t do anything. It was a sad thing, but I always try to learn from every situation that I’m in.”

Matt personalized his Lung Power Team fundraising approach by sharing Megan and Robert’s stories. This helped his network connect their support to RHA’s efforts, such as helping people quit smoking through Courage to Quit and funding lung cancer research. Many have already joined Matt in making a difference as he prepares to run the Chicago marathon on October 8, 2017.