Written by Amanda Sabino with contributions from Tim Thornton

When Tim Thornton went skiing in March 2017, he didn’t think much of the fact he couldn’t keep up with his wife and daughter. He had always been physically active in a variety of sports and was used to the altitude – having previously lived in Colorado for 15 years – but supposed age was finally catching up with him. On a 7,000 foot elevation hike near Denver that same day, he completed just 300 feet. He sat on the side of the trail as his wife and daughter continued. 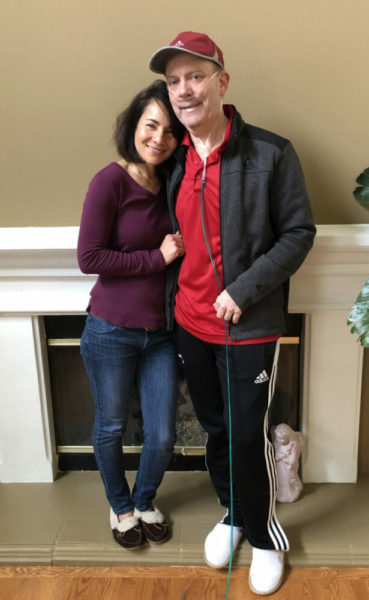 Tim and his wife Malea on Mother’s Day 2019 shortly before his transplant.

That August, as Tim began to accept the slowdown of middle age, he went to his primary care physician with a persistent cough. A chest x-ray showed something abnormal, and a pulmonologist requested a CT scan.

It was just days before his son’s wedding when the CT results arrived, and Tim’s life changed forever. He was diagnosed with idiopathic pulmonary fibrosis (IPF), a chronic, incurable disease that causes scarring in the lungs and makes breathing difficult.

Though daunted by the diagnosis, Tim and his family remained optimistic. The wedding celebration went forward as planned. Tim describes the day as pure joy, watching his son begin a future with his new wife.

Even on a day of celebration, Tim continued to confront what his future would hold.

“It isn’t easy being told you have a terminal disease for which there is no cure,” Tim says. “The mental conflicts were enormous. In the back of my mind, I knew I had to face reality, but I also wanted to stay as positive as possible to focus on the goal of staying strong and getting better.”

Tim’s breathing continued to worsen through 2018, and although he danced at his work holiday party, by then his lung capacity was half that of healthy lungs.

Later that winter, Tim caught a virus. His lung capacity plummeted. He began 2019 on oxygen, both at work and at home. By March, his lung capacity was down to 30 percent of normal. He was put on the list to get a lung transplant.

Still, he remained optimistic. He wrote in a blog post that May, “The doctors continue to say they receive a couple of calls per day about possible matches, but they are not ‘quality.’… I am number 1 or 2 on this regional list so I am very optimistic. My health is stable…. I am thankful that my spirit and soul feel healthy and strong.”

Yet Tim found his spirit continuously tested. On May 12, he received a call from the transplant coordinator saying they had found a match. Tim checked-in for surgery that evening, only to find the transplant team had determined the new lungs were not the perfect match.

The wait continued. He knew the call could come at any time. For a transplant to work, however, everything has to go right. Even the common cold can prevent a recipient from receiving new lungs. 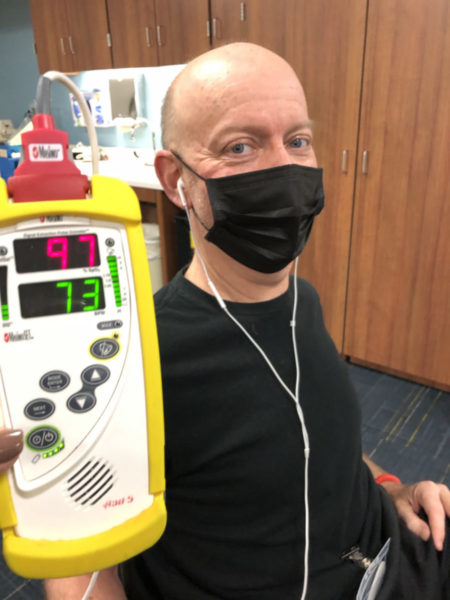 Tim celebrates his new lungs and breathing like normal again.

“I had full faith in the system and the great people,” Tim says, describing his care team from Loyola University Chicago “You do start getting worried if everything is going to line up,” he admits.

A New Lease on Life

Dr. Dilling, Tim’s pulmonologist and clinical expert in lung transplants, would see him in the hospital halls walking around with his oxygen

tank. With a mixture of amusement and pride in his patient, he’d say, “every time I come around here you’re always walking around.”

Tim would respond with a hopeful smile and say, “Well, you told me to stay healthy.”

As Tim rested in the pre-ICU one night, the hospital bed phone rang. It was Dr. Dilling – and the normally reserved doctor sounded very excited. 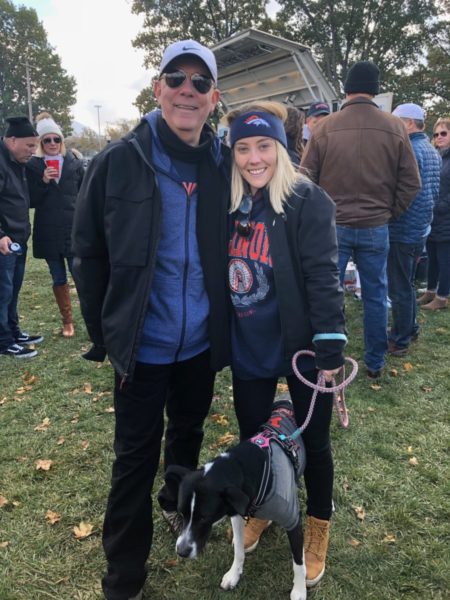 Tim and his daughter Lexi during “Dad’s Weekend” at the University of Illinois, shortly after his transplant.

“I think we found the perfect lungs for you.”

Once Tim confirmed he was ready, the wheels were set in motion. Half of the transplant team hurried to get the lungs in time. The other half of the team prepared for surgery.

Tim’s surgery went well, and within 24 hours of waking up his breathing was strong enough they took out the respirator. Not only was he breathing on his own, but he could even whistle. During the most challenging aspects of his recovery, this was the moment he held on to.

The roller coaster of mental challenges Tim endured has made him grateful every day. His journey with IPF and receiving a transplant inspired him to sign-up for Respiratory Health Association’s Hustle Chicago stair climb.

And every day, he’s able to exercise and train for a little bit longer. “It was surreal that you could go from not being able to breathe to thinking that you have a second chance with a new set of lungs,” he says. “I am forever grateful to the donor’s family who made the decision to donate the gift of life.”

Tim’s family will join him as part of the Loyola’s Lung Angels team for the February 23 climb at Hustle Chicago. To join Tim on his journey to fight IPF and help fundraise for lung disease research, click here.