Tom Earll is Making Memories with Every Breath

When Tom Earll’s daughter, Katy, planned her wedding, she easily chose the venue and the dress. But one heartbreaking fact loomed over it all: Katy didn’t know if her father would live long enough to walk her down the aisle.

“It was very possible that I was going to die and not be at her wedding,” Tom explains. “I kept looking forward to that day. Even at the very end when I was very sick and could hardly get off the couch.”

At that point, Tom had been suffering from idiopathic pulmonary fibrosis for 10 years. He was on the transplant list, but his doctor said he had a maximum of two months to live.

As he lay in bed those last two months with his wife caring for him, Tom found strength in his daughter’s future. He fought to be present and create a memory he and his family could cherish. 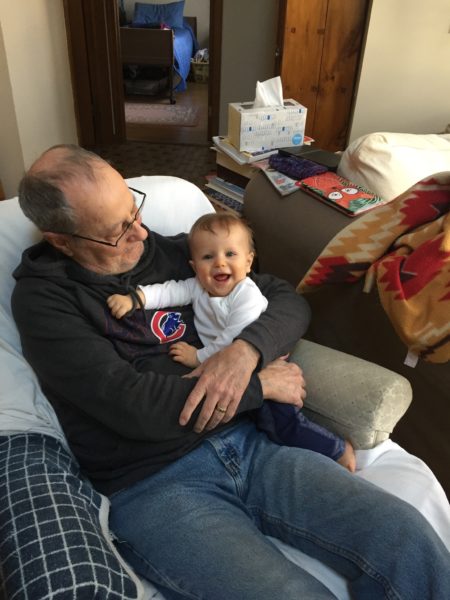 Tom with his grandson.

Years before, when he was first diagnosed, Tom only had to wear oxygen while exercising, but by the time of his daughter’s engagement he had to carry an oxygen concentrator and tanks of oxygen wherever he went. As his conditioned worsened, he needed the concentrator even while sleeping.

Tom’s path to this point was not direct: a misdiagnosis of asthma delayed his treatment for years. It wasn’t until Tom sought the help of pulmonologists at Loyola Medicine that he finally arrived at the correct diagnosis and was put on the transplant list.

You have to be “sick to enough to qualify, but healthy enough to qualify,” Tom says, acknowledging the difficult decisions hospitals must make when deciding who receives a transplant and who doesn’t.
Months passed while Tom waited. Katy’s wedding ticked closer.

Then one night, while Tom rested in bed with his breathing labored, the phone rang. The hospital had a pair of lungs for him. On December 8, 2015 he received a bilateral lung transplant.

On the third morning after his transplant, Tom could see downtown Chicago from his bed. The sun rose, reflecting off the glass buildings. “I sat up and took a deep breath. I got hit with this wave of emotion, and I burst into tears because I realized that this was my new normal,” Tom recalls. 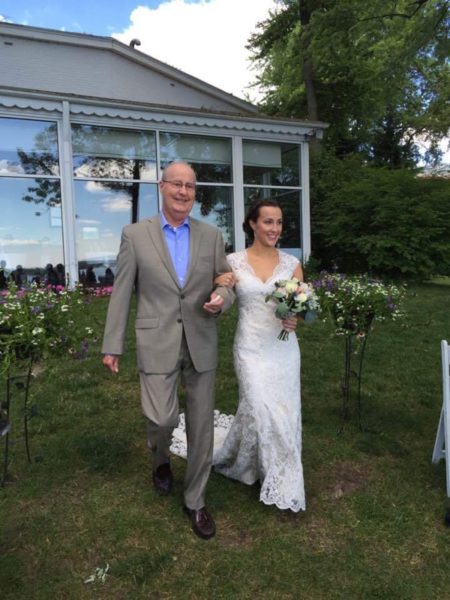 Tom walks Katy down the aisle.

In the end, Tom was able to walk his daughter down the aisle, making a dream come true for them both. “I danced like a fool at her wedding,” he laughs, “and there was always a chair close by so I could sit down and rest.” Because while Tom emphasizes the joy of making new memories without difficulty breathing, his road to recovery is long and some things in his life will never be the same.

“I grew up swimming and boating, and I was in, on or under the water most of my life. I can’t do that anymore. Some days you struggle to win the mental battle. But I always wanted to play the guitar, so instead, I do that now.”

In addition to learning guitar, Tom has taken up a few athletic challenges. Just nine months after his transplant surgery he ran his first 5K with friends and family cheering from the sidelines in custom t-shirts that said “Tom’s Second Wind.”

This year, he saw that Loyola had created a Hustle Chicago team to benefit the lung disease research supported by Respiratory Health Association.

That’s how Tom wound up joining “Loyola’s Lung Angels” and practicing for the climb in his local municipal parking garage, which has 4 floors of stairs. He goes up and down 20 times to reach 1600 steps.

Of the race and the rest of his recovery, he says, “I’m going to keep going at a steady pace.”